Mobi Kids I found similar to Bananagrams but for numbers. And just like with Bananagrams, Mobi Kids can be used for more than just playing the main game. The game itself is played with 2 players or 2 teams. You split the game pieces; green for one team and blue for the second team. The white pieces are shared and have addition, subtraction and equal signs. While the green and blue pieces have numbers on them. You are meant to use all of your pieces (green or blue) by making math equations. The 1st team to correctly use all of their pieces wins the game. We have played with Mobi Kids like the manual says but also for other things. I have had our daughter practice both making numbers and reading them. The pieces are also useful for making equations. I like to make sure that our daughter understands how to find the answers to math problems as well as forming the problems herself. I can either tell her a problem to make or make up a word problem. Doing these extra ideas and playing the game are quite fun for our daughter who is not fond of mathematics. I would suggest checking them out and seeing the other small games and items Timberdoodle has to offer. 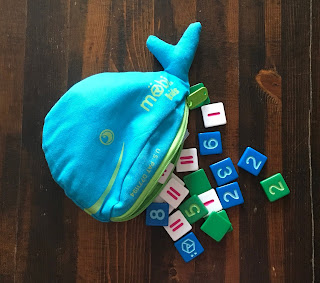 June 14, 2019
These alphabet and number cards are amazing! I love them for teaching little kids. Price: 20$ for a set of 6 + shipping if shipped You may choose and color you like. My items are intended for decoration purposes. Not intended for children or infants to play with as some parts can be a choking hazard.
6 comments
Read more