We got this game from Timberdoodle and oh my goodness! I love Jump 1. If you have read our previous post then you know I love math. I want our daughter to find the joy I get from all things math. She has not even though she is good at it. However, she did tell me that this game was fun and she wants to play it again. I would say Jump 1 is good for kids who are learning numbers up to first grade children. If your child needs a refresher in what comes before or after a number then I would also suggest getting this super fun card game. The object of the game is to place a numbered card that comes before or after the top card on the pile. 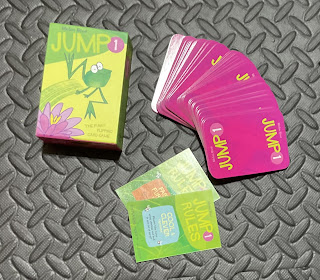 There are two versions of the game that you can play. Cool and Clever or Fast and Furious. First, we tried Cool and Clever. It is a slow paced version. Perfect for if your child is just starting to learn number order and anything up from that. You have one card in the middle and then split the rest of the deck evenly. You get take 5 cards from your pile and play a numbered card that either comes before or after the number card in the middle. This continues until you either have no cards left or no plays can play anymore cards. This was easier for our daughter to play because she could take the time needed to see which cards she could play. And if she did not know what numbers she could play I had her figure it out herself so she could use the math skills she has learned in class. 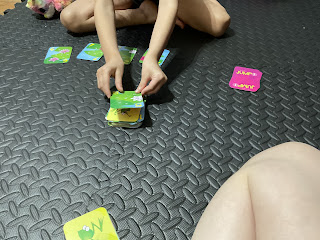 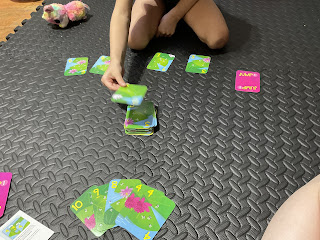 After we finished the Cool and Clever version we tried our hand at Fast and Furious. In this game you have two cards in the middle and then split the deck evenly. Instead of taking turns you each play whatever cards you can as fast as you possibly can. This was a bit harder for our daughter because once a new card was placed she was not able to take the time to figure out what cards could be placed next. This fast paced version of the game would be better for my husband and I to play together. And our daughter could play it once she is able to remember these math facts faster. I e do not really work on what number comes next or before a lot as she is doing addition, subtraction and time right now. But doing a game like this shows me this is something she should work on a little more to get faster at the facts. 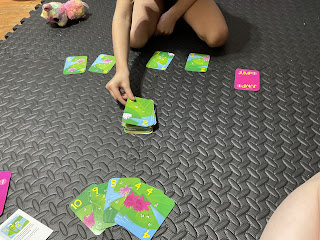 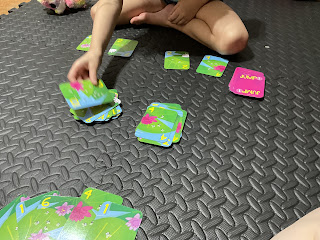 If you are looking for a fun math game to play then I would definitely suggest this one. It’s fun, fast and works on math skills without the child actually knowing they are doing math. This is one of the games I would keep around and use regularly at the math level she is now (1st - 2nd grade). It would be a great refresher for 2nd grade children. And a fun challenge for kids starting to learn the skills. Even if you do not homeschool like us it is a good game to play with your kids and improve on their math abilities since math can be a challenging subject for kids. So, definitely check our Jump 1 for your family. We will be using it on family game night!